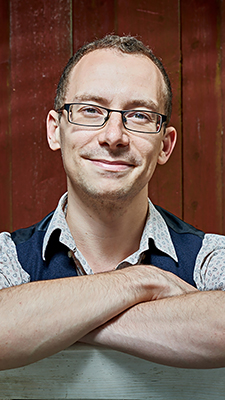 Nick Wiseman-Ellis was born and grew up in the pretty little town of Norwich, England.  He discovered the accordion at the age of 16 when he saw one being played at a concert by a local band and started learning.  At the time, he was already learning classical violin but decided to pursue his interest in folk music further. In 2010 Nick was awarded a BMus 1st Class Honours Degree in Folk and Traditional Music from Newcastle University. Specialising in diatonic button accordion and fiddle, Nick spent his university years studying traditional and contemporary music from France, Brittany, Scandinavia and the British Isles. During that time he also found a love for composing. Since studying Nick has travelled around Europe performing and giving workshops on accordion and fiddle with various different bands and projects. His musical career has now brought him to Germany to join IONTACH as their newest member.